Staple Crops is a creative enterprise. 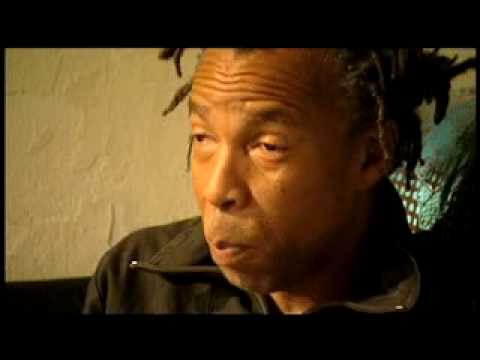 He was screaming at the top of his lungs in front of the bar. Or he was nodding off to sleep in an armchair, a tilted glass of ruby wine dangling from his fingertips. Still, it could be he was dragging on a cigarette sitting with his legs crossed flitting ash and exhaling smoke, his head banked to one side in mid conversation. Then again, he may have very well been laughing loud and obnoxious, his shoulders heaving underneath a jokeâ€™s imminent weight much to the surprise of the surrounding uninformed.

What was Darius James doing the last time I saw him? In fact I donâ€™t remember where we were. It was either Berlin, where he had been living for 10 years convincing everyone that he was an authentic drunk who wasnâ€™t going to learn the language; or it was in the middle of a near brawl in some Lower Eastside bar because a trumpet player didnâ€™t like Dariusâ€™s evocative slurring to senior citizens or his propositioning of certified reality-television hookers from Nevada.

In any case, all of the above answers are possible because they are each true, and that is the grace of Darius James: author, provocateur, and ex ex-patriot who my circle of friends likes to refer to as a National Treasure.

Darius and I met after he had been kicked out of the Astor Place Barneâ€™s and Noble for reading absurdist profanity at the top of his lungs and making customers highly uncomfortable, which I think says a lot about why his time in Berlin was full of challenges. Because although some Germans may love Barak Obama and Graffiti and Hip Hop Ã¡ la Afrika Bambaataa and Snoop Dogg, many only love Black folk for as long as your visitors visa is valid. And while this may be a sweeping generalization of gigantic proportion, I feel it is for the most part quite accurate (because once a Black person stays in Germany for over 6 months, then there is the necessity for some sort of personal understanding to occur between German and Blackâ€”not that the two are mutually exclusive, but where there is need for understanding, there is need for work and people are generally too lazy when it comes to the hard work of cultural understanding; this is why any sunny season in Western Europe is chock full of â€œcultural eventsâ€ that parade African and Latin culture through music and dance, sometimes in zoos right next to the monkey cagesâ€”in an effort to present tolerance and understanding in a generic hands-free style of service that makes it easy for everyone to agree that this particular space for cultural exchange is highly controlled and safe, therefore permissible. Darius James, however, is Darius James all day each day. This is a man who recites Nabakovâ€™s entire first chapter of Lolita from memory. Everywhere he roams, inclusive of each season and all latitude and longitude, Darius James is at large and out of control, beyond submission to cultural taboo. Thatâ€™s tough to pull off anywhere, much less in a country whose recent holocaust history makes public intolerance a pseudo non-option for would-be censors, who realizing the danger of choosing a target out-right, will direct their angst toward you indirectly, sometimes by trying hard to ignore you. But Darius James, ladies and gentlemen, can be pretty hard to ignore. If youâ€™ve got a fat girlfriend heâ€™ll pinch her cheeks and make baby sounds. If sheâ€™s skinny heâ€™ll grab her by the wrist and half-mumble-half-laugh some Pryor-grade vulgarity while she looks to you for help. And you, heâ€™ll tell you straight up, you look like a swollen Johnny Depp with cirrhosis of the liver, or Kunta Kinte on Star Trek, or if you happen to be an Austrian in Vienna heâ€™ll let you know Arnold Schwarzenegger ainâ€™t shit, and heâ€™ll follow it up with a loud, Sieg heil! Which is right around the time when every Aryan in the house starts to lose it. And in this respect, it doesnâ€™t matter if youâ€™re in Vienna, Berlin, Manhattan, Kyoto, or Amsterdam, if Darius is holding court, some native is bound to do their impression of a thermometer whose mercury rises and rises until it bursts.)

When I first spent real time with homeboy, it was because he had invited an x-girlfriend and I to a writing workshop at his crib. Upon arrival, I dutifully removed my kicks. The room was filled with little girls. They were all college freshmen, but in retrospect they just seem little and barefoot. I decided then that Darius was someone that it was going to take a long time to understand even a little bit. It was early fall 1995 and he lived in what is now known as DUMBO. At the time the whole neighborhood was still grimy enough to leave your fingernails black when you came in from the street. The nearby Vinegar Hill housing projects still held influence over the little pocket of would-be lofts and walk-ups, which is to say DUMBO was still a weed grown playground of decrepit warehouses and cobblestone. The little ambiguously-Latino corner diner at York and Front was a sort of hub for the wastelandâ€™s mechanics, bridge workers, and grubby artists on smoke breaks. None of the now manicured waterfront was yet developed and denizens walked long blocks to cop groceries, do laundry, and in general to reach the rest of civilization, the housing projects included, of course.

It was through Dariusâ€™s workshops that I met people I consider luminaries of literature, journalism, and music: Joyce scholars, editors of Playboy, Times Square peep show cowboys, writers, rockers, drinkers and carnival men. Darius introduced me to an underbelly that was warm and comfortable, that knew what it was to sleep on catacomb concrete and climb to street level squinting hard at the morning light.

After spending eight years away from Darius, reuniting with him in Berlin once I had grown to understand New York a bit more, or at least my place in it for a moment and the empty space that D no longer filled there, it was then that I was able to see Darius for a bit more of what he was, somehow what he had been in Brooklyn, what he had become in Berlin, and what rested, albeit restlessly, behind all of that:

Darius is funny, endearing, an orphan, manic, a drunk, a tormented soul, a threat to establishments worldwide, a serious cook (I once saw him swipe a plate of his tender barbeque away from a customer who was about to douse it in ketchup), a history buff, a curious kid in a dusty magic shop, a son of the Black Power movement who still places flowers on the grave of its most forgotten; He is a miracle baby of the electric war machine, a son of the P, a small child struck in the street by a car, a boy in lederhosen squinting at the Alps on vacation with his father, a young radical, a Lower East Side specter, a master of satire, a giant on the page, a raw emotional man in a social fabric where Black Male remains synonymous with threat. And most of all, he is a committed artist who decided one night never to work any job that wasnâ€™t directly involved with writing, and having decided that, liberated a number of red wine bottles from his place of employment before setting off into the night 30 years ago. Who other, but Mr. James, I presume.